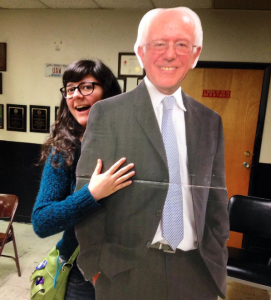 If you know me at all, it’s pretty obvious that I support Bernie Sanders. Many people support me in this – many others think I’m crazy, and say I should support Hillary Clinton. When I ask why, the most prevalent answer is that she would be our first female president.

When I answer that I don’t believe that is a good enough reason to choose our future leader, people tear me apart – and while there have been a few men who called me crazy, the women who support Hillary have said much worse. 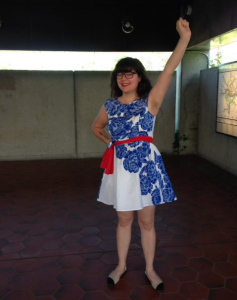 Feminism is about women being seen as equal to men, and given the same rights. When you tear down a fellow woman for standing for what she believes in, you are not a feminist. When you support a candidate simply because they are a woman, you are the one hurting the feminist movement – especially when that candidate perpetuates the wage gap by paying her female employees less than her male employees.

People like to claim that Hillary is uniting women across the country – yet they have turned against each other in her name. The Democratic Party claims that she is the one person who can unify the party – yet millions of people are leaving the party in protest of her presumptive nomination.
I have heard Hillary called a unifier over and over, yet people obviously don’t understand what it means.

The campaign of Donald Trump has succeeded due to hatred and fear – and although it is more subtle, that is how Hillary Clinton’s campaign has succeeded, as well. Donald Trump has united his followers against anyone who is “different” in skin color or religious beliefs; Hillary Clinton is trying to unite her followers against Trump. Yet a true unity is not only being united against something, but being united for something. 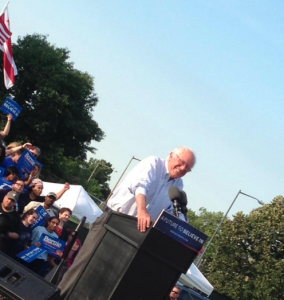 Bernie Sanders has truly unified the people of this nation. Billions of people who had never voted before registered this year so that they could vote for him. Thousands more individual citizens donated to his campaign than any presidential campaign prior. He has been supported by politicians, celebrities, and every day citizens, from every political party, from every religious creed. They are standing up for regaining our birthright as American citizens – an equal voice for all within our democracy.

Hillary and Trump are both running campaigns for personal power. Bernie is running a campaign for all American citizens.

Simply being a woman in power does not make you a feminist. To be feminist, you have to prove it with your actions, as well. Go ahead, call me and other female Bernie supporters anti-feminist, tell us we’re hurting the feminist movement by not voting for Hillary – but know that by doing so, you are stooping to the level of the Trump campaign. 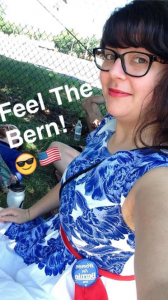 I choose to stand with the candidate who cares about all of us. I choose to move forward with love and peace, instead of hatred towards anyone who believes differently than me.

I choose to feel the Bern.