For years, I told myself – and everyone I knew – that I would never, ever work at a restaurant. I’m too klutzy to be a waitress or bus tables, and I know I would never be able to cook under pressure. (Even though I loved watching Iron Chef with my dad, the thought of participating gave me nightmares.)

That “never, ever” promise has turned into a big, fat lie. (Pizza Festa started me in that direction. This made it real.) I am now a hostess at the newest American Girl Bistro location, in their 19th store, which is opening this coming weekend in Nashville, TN. This is good for me, since I won’t have the chance to trip over my own feet when seating our guests. (It’s one of their tiniest locations.)

My experience thus far as an American Girl employee has been amazing. Not that I expected anything less, having grown up reading their books about historical girls who made me desperately wish that time travel was a possibility….

Reading Felicity‘s story caused my obsession with Colonial History, which then caused me to write a book (one of my first “novels” that no one else will ever see) about a group of kids who are accidentally transported to Colonial times in Williamsburg, VA by magical bumper cars. Josefina was the most similar to me in personality, and I loved learning new Spanish words while reading her story. Kirsten was an inspiration to me after my family’s move to Minnesota (moving from southern Illinois was small potatoes compared to her moving from Sweden). Addy made me appreciate the fact that I had been able to attend school from the early age that is ordinary in today’s world, instead of struggling to learn how to read in the midst of a war. Samantha‘s story started my fascination with studying women’s suffrage, as well as current feminist issues. Molly brought about my curiosity in learning more about World War II, including what was happening outside the U.S.A. (which continues today – just finished reading Jodi Picoult’s The Storyteller… a must read!).

Needless to say, American Girl was a firm building block during my childhood, and now, it will be a large piece of my adult years, too. Because of this job, I finally took the steps to be able to live on my own and to be able to get myself where I needed to be – despite not yet having a driver’s license. (Public Transportation and stores within walking distance FTW!) Because of this job, I’m finally allowing myself to meet real, live humans, and make friends with awesome people.

The fact that I’m finally moving forward is not ONLY because of American Girl. I’ve had help and support from some amazing friends and family, as well. Such as my dad, who took me out for a fun Father/Daughter day in Franklin back in March, and decided to search for jobs (for me) on his phone, and found out that American Girl Nashville was beginning their hiring process. I hadn’t even known that Nashville was getting an American Girl location. But that night, I found the online application, perfected my resume and wrote a nostalgic cover letter, submitted a photo of the cover of an American Girl book I’d written for a Young Author’s conference in the 4th grade, and waited a couple of weeks… to finally get a phone call from the Bistro Manager, fangirl over being contacted for an interview, ROCK said interview, and then get a job offer that started the hectic amazingness that has been my life for the past couple of months. 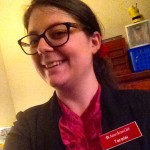 Grand Opening is Saturday, May 30th, and Sunday, May 31st. We’re not going anywhere after what will be an epic beginning, so start making plans to experience American Girl in Nashville.

Disclaimer: Neither American Girl nor Mattel, Inc. endorsed or solicited this article. I wrote this of my own accord, and it does not necessarily reflect their views.