On March 16th, 2013, around 6:45 in the evening, I walked down the sidewalk beside 12th and Porter, the venue where the Drunken Irish Show presented by Gimm+Icky was to be held, feeling quite frustrated. I had just been inside, and I hadn’t been able to find anyone to help me. I was looking for the members of VanCo., the band that would be opening the show that night, because I was supposed to be interviewing them.

Suddenly, a door burst open in front of me, and I saw someone who looked vaguely familiar stride out. I immediately took off down the street, running while trying to look as if I wasn’t. I caught the man’s attention, and found that it was Evan, the bassist for VanCo., and I said goodbye to my frustration. Soon, I was surrounded by the joyful crew that is VanCo., standing out on the street corner where I had just caught up with Evan, and preparing to start asking my questions.   END_OF_DOCUMENT_TOKEN_TO_BE_REPLACED 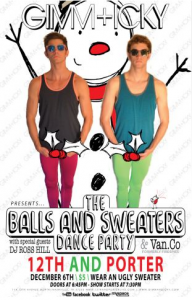 I found out about Gimm + Icky and their music when I was looking for places to take my sister when she was in the Nashville area visiting from Seattle. I saw that they were having a “Balls and Sweaters Dance Party” at the historic 12th and Porter in Nashville, Tennessee. Intrigued, I began looking into and listening to their music, and I was hooked. Their music makes me want to get up and dance as I haven’t danced in a while, and as Tripp Weir, the rapper of the duo says, that’s why he wanted to make music. To make people dance.

That’s right. I got to sit down before the show with Tripp Weir and Jeff Garrison, the duo who are Gimm + Icky, and interview them. END_OF_DOCUMENT_TOKEN_TO_BE_REPLACED