“Become immortal or die trying.” That’s what it says on the cover of my copy of The Goddess Test by Aimee Carter.

In the book, it’s very true for Kate Winters after she moves to the small town of Eden, Michigan to fulfill her mother’s dying wish. After she meets the mysterious Henry, she is pulled into a world she didn’t know about, and doesn’t want to know about, where she has to pass seven tests in order to become immortal.

The Goddess Test is the first novel in Aimee Carter’s “The Goddess Test” series. It’s one of the books I received free with my first batch of books from being a part of Figment Fiction’s Street Team this past summer. It was a signed copy, too, which is awesome! Basically, it’s a different way of looking at Greek mythology. And I love it! Aimee Carter has a great writing style, and I always felt as if I were really there, seeing everything through Kate’s eyes.

I also received a copy of Goddess Interrupted, which is the second novel in the series. On the cover of this novel, it says, “What if immortality isn’t forever?” And I’m just going to leave you with that, so I don’t give you any spoilers. Since I’ve already talked about the first one a bit. But it was also amazing… it just left me with a bit of a frustrating cliffhanger.

But, I’m super excited, because Goddess Inheritance, the 3rd and final novel in the series, is being released February 26th, so I will finally figure out what is going to happen! Happy ending? I hope so!

Aimee Carter has also written little novellas to go in between the main novels that I have just written about, book 1.5, The Goddess Hunt, and book 2.5, The Goddess Legacy. I still need to read 2.5, but 1.5 was very helpful as to what happened in between books 1 and 2.

The point is, I’ve loved the books that are out so far, and now I’m very excited for the final one. 🙂 Stars all around for Aimee Carter and her Goddess Test novels! (Today is National Compliment Day, so if Aimee Carter reads this… this is my compliment to you!) 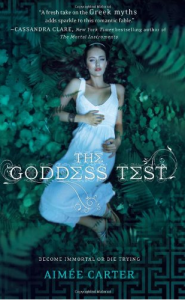 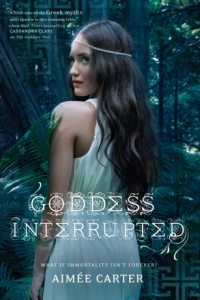